The lives of children and adults with life-limiting, rare and terminal illness have been transformed by donations from the Anderson Foundation.
The beneficiaries across seven charities said the money had made a ‘phenomenal’ difference to vulnerable people who face a daily struggle to survive.
Hundreds of people attended the Anderson Foundation Christmas Luncheon and took part in an auction last December to raise the vital funds.
Mark Anderson, founder of the Anderson Foundation and chairman of Anderson, said: “We are delighted to have raised a phenomenal amount of money that will hugely benefit our seven chosen charities.”

Cancer patients will benefit from ongoing reflexology, aromatherapy and counselling to boost their well-being thanks to a donation.
As recognition, the charity, which receives no government funding, has decided to name one of its treatment rooms at its Mid Essex Support Centre, The Anderson Foundation room.
Karen Mitchell, community fundraiser from the charity, said the donation will fund hundreds of hours of treatment for cancer sufferers.
She added: “The Anderson Foundation donation will fund 400 reflexology, aromatherapy or counselling treatments for our clients living with cancer. On behalf of our volunteers, staff and clients at Helen Rollason Cancer Charity – thank you.”
As well as the newly named treatment room and extra therapies, the charity will use the money to support its running costs as well as buy some new sofas for its centres.

People suffering from a rare, life threatening yet little-known condition are more likely to receive quicker and better diagnosis and treatment as a result of the Anderson Foundation donation.
Hereditary Angioedema (HAE) is a debilitating condition that causes oedema or swelling to the feet, face and airways as well as excruciating abdominal pain, nausea and vomiting when swelling is located in the intestinal wall. But many sufferers can be misdiagnosed and forced to undergo medical procedures that having nothing to do with HAE. Incorrect diagnosis has seen sufferers undergo unnecessary appendectomies, bowel surgery and psychiatric treatment.
Angela Metcalfe, CEO of HAE UK, said: “HAE patients frequently spend a long time before they are correctly diagnosed so donations such as that of the Anderson Foundation go towards many aspects of raising awareness of this rare genetic condition.
“Mental health support is a priority but top of our list is ensuring that more emergency medical practitioners are aware of the condition so that treatment is accessible and accurate.”

The donation to Shooting Star Children’s Hospices will help families continue to have much-needed respite.
The charity, which provides care for babies, children, and young people with life-limiting conditions, said the money makes a world of difference to families like Jake’s. The 16-year-old has the rare genetic metabolic disorder fucosidosis which means he can go for two days without sleep. 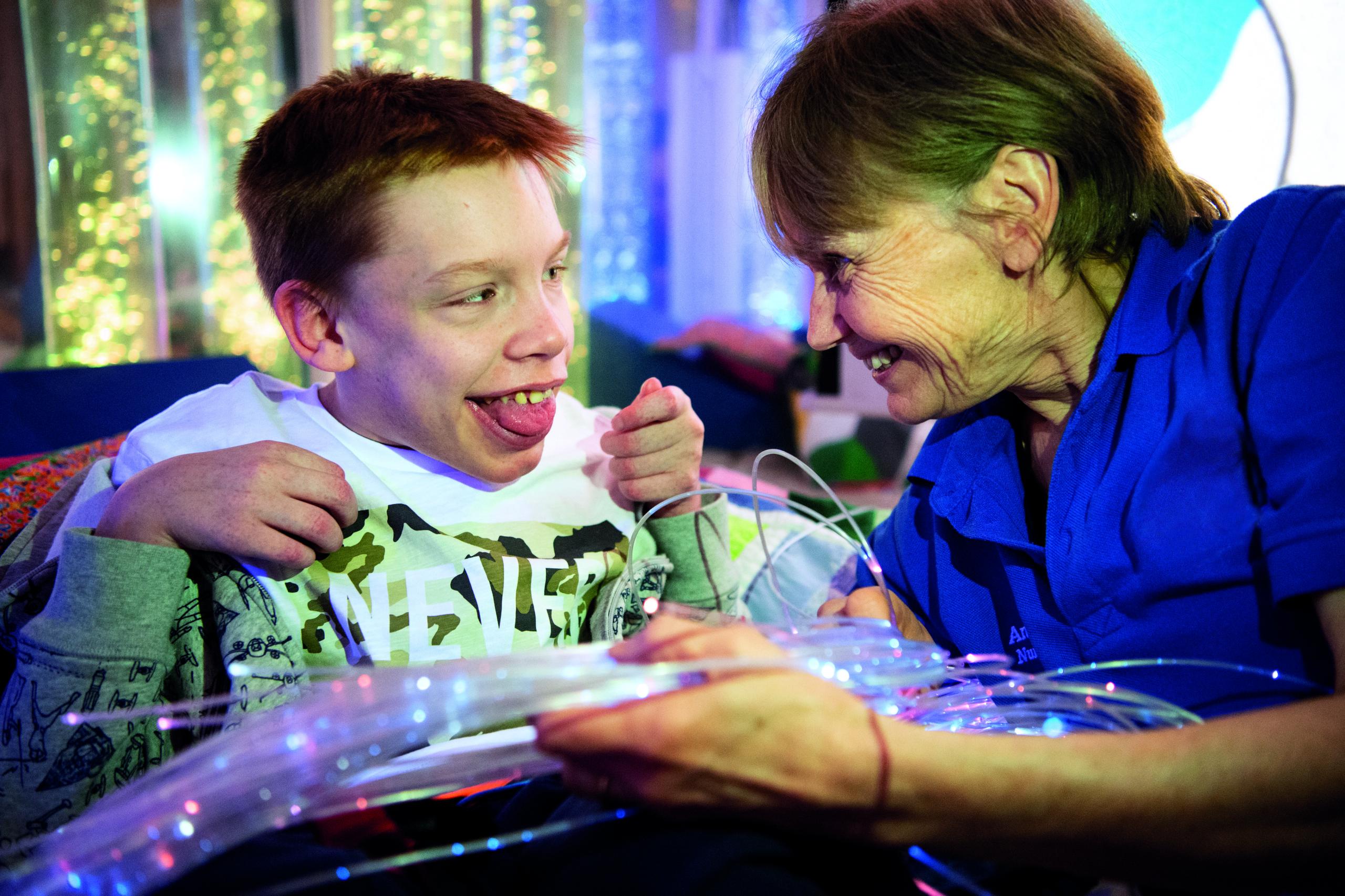 His mum, Karen, said being able to access care has given them the gift of time. She added: “Jake’s condition is progressive, so he’s never talked, and now is unable to walk or have food orally anymore.
“He can go 24-48 hours without sleep at all, and during this time I must be awake because of the risk of choking. Having someone to talk to at Shooting Star Children’s Hospices really helps.”

Little Rudy will continue to feel safe, happy and expertly cared for by Haven House Children’s Hospice thanks to the cash injection.
The two-year-old was diagnosed with epilepsy and hypotonia or low muscle tone when he was just 11 weeks old. The condition, known as MCAHS-1, means he struggles to hold his head up, sit up or roll. It is unclear at what age Rudy might stand or walk – if at all. His parents have found much needed refuge and support at Haven House Children’s Hospice in Essex. 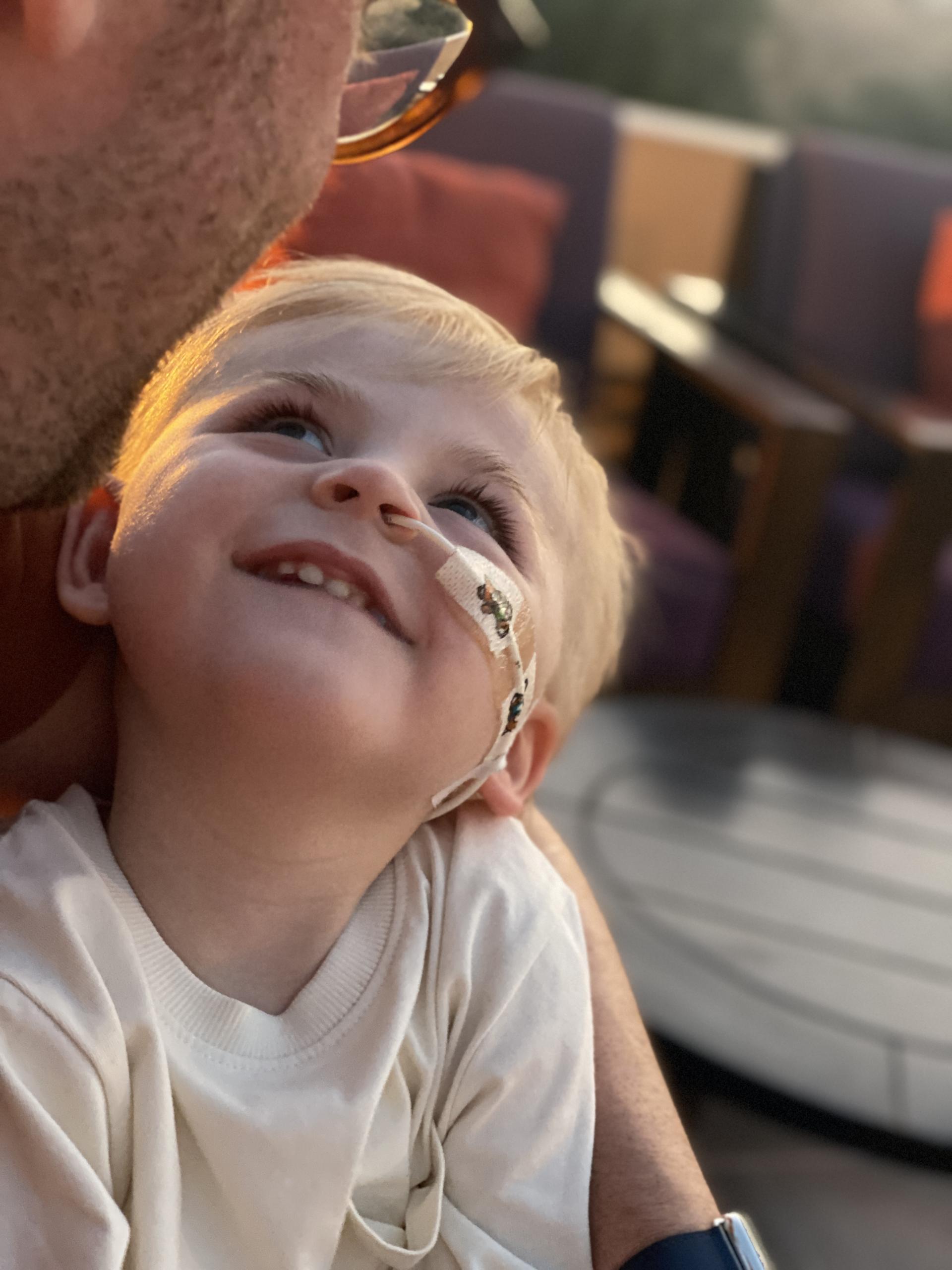 Rudy benefits from a range of therapeutic services including music therapy, yoga and physiotherapy, and occasional respite care.
Rudy’s mum Nicola said: “Haven House is somewhere we can take Rudy for respite care and know that he will be safe, happy and expertly cared for. We go to classes there and feel ‘normal,’ at ease, and supported. It really is a very special place and is invaluable to us as a family.”
Great Ormond Street Hospital Children’s Charity
Seriously ill children hoping for a medical breakthrough are receiving ongoing bumper fundraising donations thanks to a £20,000 Anderson Foundation.
Children at Great Ormond Street Hospital Children’s Charity (GOSH Charity) were given a financial boost when an original Carne Griffiths painting sold for £25,000 at last year’s auction.
The money could fund research into pioneering new treatments for children, provide the most up to date medical equipment, fund support services for children and their families, and support the essential rebuilding and refurbishment of the hospital.

For MS Action, the donation has been used to transform the environment where adults and children with multiple sclerosis and cerebral palsy receive treatment.
Keith Hymas, Chairman of the MS Action Therapy Centre, said: “The difference is phenomenal and remarked on by all our users. The Centre now reflects what we are, a place to receive therapies to improve lives and enhance well-being.
“The generous donation allowed us to upgrade a tired looking therapy centre by having the old carpet removed and slip-resistant, light wood-effect, easy clean vinyl floor laid.”
Work also included the renovation of the kitchen, installation of an instant hot water system and purchase of two computers for office volunteers.

NHS staff and patients struggling with bereavement and psychological problems or who simply need a rest will get extra support thanks to their donation.
Ellie Orton, OBE and Chief Executive at NHS Charities Together, said: “We are incredibly thankful to the Anderson Foundation for this very generous donation. As the national, independent charity caring for the NHS, funds like these help us support NHS staff, patients, and communities across the UK, and help the health service go further for all of us.”
NHS Charities Together said the donation was distributed to support projects such as bereavement support, helplines and psychological support for staff and a place for them to rest during busy shifts, so doctors, nurses and healthcare teams can continue their vital care.

A donation was also made to the Duke of Edinburgh’s Award which will help young people who have benefitted from taking part in the award scheme.
A total of 321,622 young people started their DofE in 2021/2022 – the highest number in the organisation’s 66-year history. The charity aims to empower young people, support them as they learn new skills, overcome obstacles and build confidence and resilience.