Colne Meadow will see 192 new houses in the vibrant, coastal town of Brightlingsea, located on the outskirts of Essex, a project that includes 17 affordable homes.

The development has 23 different house types on offer consisting of one-, two-, three- and four-bedroom homes in a variety of styles including bungalows, apartments, charming cottages and coach houses, contemporary three-storey townhouses and traditional family homes with views across the river estuary.

When Anderson started work on the 7.5-acre site in November 2015, the land had been generally underdeveloped since mapping records began, except for a small number of undefined small structures along the western boundary, once used for livestock.

Located on land to the south of Robinson Road, and to the east of the properties of Granville Way at the eastern edge of Brightlingsea, more recently the northern section of the site has been utilised for storage of hard‐and soft landscaping materials including formation of a stockpile of waste (soil/stone) materials.

Two significant landfills (former mineral extraction workings) exist in the vicinity of the site, to the north and south‐east.

Anderson’s work has involved using varying foundation and floor systems across the site as the ground is made up of sand and gravel. The project has also included construction of roads and sewers to a maximum depth of 4.25m below ground level.

In what is a haven for wildlife, Hopkins Homes created a large surface water attenuation pond which involved excavation and replacement of approximately 5,000m3 of soils.

As part of the overall site access system, Anderson has carried out improvements to Robinson Road (S278 agreement), including road widening and installing a cycleway link to the existing footpath on Robinson Road.

Anderson used a mix of pad and beam to traditional strip and raft foundations for the homes, together with a mixture of ground bearing slabs and suspended floors.

To combat stormy weather, Aquacell storm water soakaway crates have been installed in back gardens to allow for the dispersal of storm waters that then soak into the underlying sand and gravel below.

Anderson Site Managers for this project are Jason Lawrence (Phase 1 and 2) and Danny Stocking (Phase 2), who oversee 12 people Anderson employees.

Speaking about the site, Jason said: “Hopkins have created a haven for wildlife by installing the large attenuation basin away from the main development, undisturbed, with views across the river estuary, an area that can be enjoyed by everyone, there is nowhere you’d rather be.” 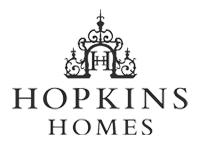